Jesse DelGizzi is a man of many experiences who classifies himself as a wanderer.

And, really, looking at his resume that classification rings true: Born and raised in Medford, Massachusetts, an undergrad degree from Virginia, and professional and educational stops in Nova Scotia, Boston, Washington D.C., and France before arriving in south Louisiana to pursue a Master’s of Music with a concentration in music theory and composition.

Recently, DelGizzi graduated from UL Lafayette in Spring 2018 as our outstanding master’s graduate, and we were lucky enough to sit down with him for a quick conversation as he prepared for his next move. 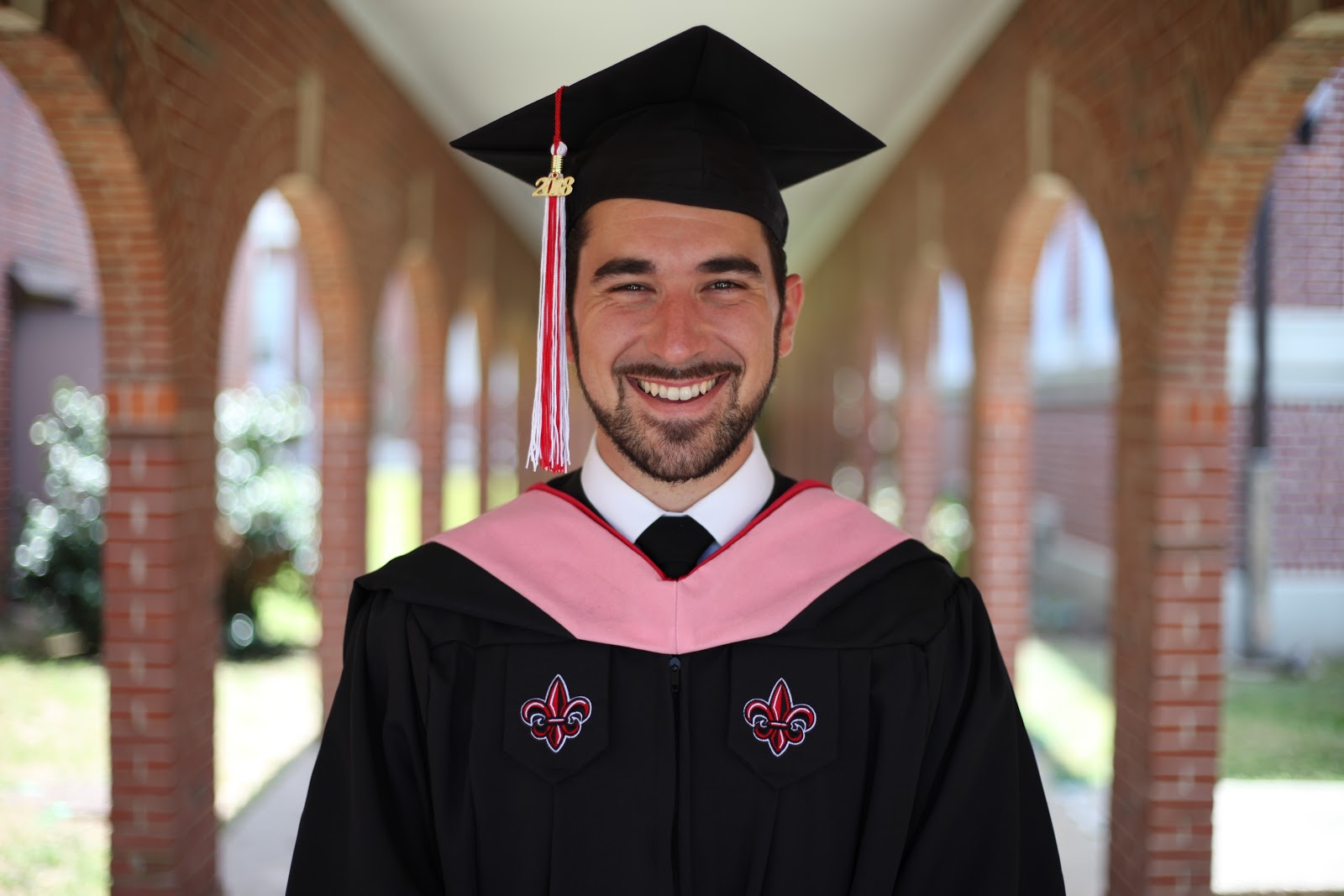 How did you end up in Lafayette?

I was in Canada studying French at St. Anne University and I met a big contingent of people from here while studying in Nova Scotia. They were crazy, in the greatest way, and meeting them (in 2008) convinced me to move down here. Between then and moving to Lafayette, I studied in France, I worked in Boston, and worked in Washington D.C.. While working in D.C., and commuting hours at a time back and forth, I was like “You know, I just don’t know if this is the right place for me right now.” And the Acadiana guys that I met and stayed friends with told me to come down here [to Lafayette] to check it out.

Were you in school in Boston and D.C.? If not, what were you doing?

In Boston, I was teaching English in a school downtown. But, in Washington D.C., I was a cyber intelligence analyst for a private company there. [Laughs] Yeah, very disparate interests.

So, I was doing that and also providing support in the foreign languages I knew at the time [French and Italian]. The company I worked for had people all over the country, and I wanted to be one of those guys. I talked to my boss, and told him, “Hey, I’m moving to South Louisiana” and he didn’t have an issue with it. So, in 2013, I packed up everything I had in my ‘95 Chevy Blazer and decided to try it out for six months. That was five years ago and I’ve been here ever since.

I enrolled at UL in 2016, so I had been here living for a few years by then. And, you know, I have a lot of interests, a lot of passions, [laughs] and I do a lot of things on a whim. But getting a master’s in music has always been a personal goal for me. I was still working for the firm in Washington, but I wanted to change things up. Get a change of pace. Also, my undergrad advisor, who is an ethnomusicologist that I stayed in touch with, had recently returned from a conference where she met Dr. Mark Dewitt, who is also an ethnomusicologist but here at UL Lafayette. And she put two and two together, gave me a call, and said “I’m with a colleague, he’s from Lafayette, you two should meet.” 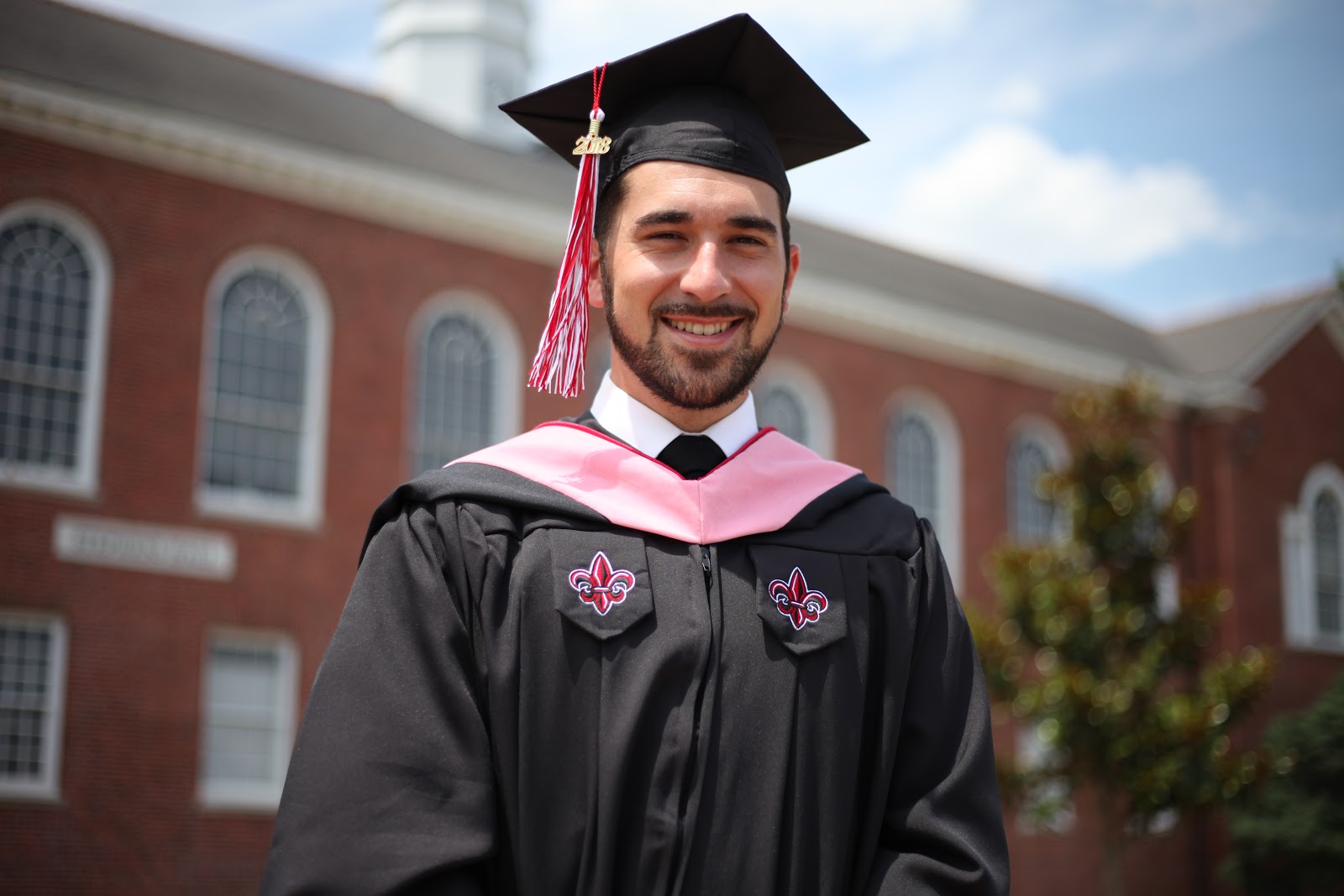 So we met and he offered me an assistantship and all of these great things that I couldn’t turn down. I quit my job in Washington and that was basically it. It was always something I wanted to do. I wanted to solidify my love of music with a personal achievement like this. But, really, there couldn’t have been a more perfect place for me to do it than UL Lafayette because of my interests at the time and my current interests. I had just gotten into the zydeco music scene both as a passion and as a side job playing as a gig musician. And, because of my work here both as a student and a musician, I got to play with and talk to some of my musical idols — Keith Frank, Chris Ardoin, Lil’ Nate, and so many more.

These guys are huge in the music industry, and if I hadn’t been living here in this town, studying at this school, it wouldn’t have happened, you know?  Everything just came together for this really amazing opportunity that everyone kind of gifted me. The convergence of the culture, the language, the music, and my passions made it perfect for not only my work, but for me.

Tell us about your thesis and your research. What is the question you asked, and what did you find?

The project is, at its essence, why does zydeco music sound the way that it does? Even if you know nothing about this style of music, you can listen to it and pick out the subtle nuances that make it what it is that aren’t explicit in the music itself. It has accordion and it’s a creole tradition, but what really makes this music? Why does it sound the way that it does in comparison to other styles of music? So we explored the beat patterns, instruments, and timbral aesthetics that make up the music. You know, why do different ridges on a washboard make different noises? And why do they use a washboard at all? How does a zydeco accordion sound different from a Cajun one? Or the Italian one that my mom used to play? We looked at the different styles, the regional dialects of zydeco, and really looked at the trail ride scene of zydeco music where a lot of those dialects are born and transformed. So, that was the goal: to figure out why zydeco music sounds the way it does, so hopefully in the future people can look back on it as a resource and an interest to people who want to learn more about the culture and community behind this music.

How did you find/come into your research project? What about it was of intense interest to you?

I knew about Cajun music and my mom [who is Acadian] sometimes let the word “zydeco” get into my vocabulary. My mom played the accordion, but more Italian style than anything. So I’m familiar with the accordion, something that repulses most Americans [laughs] — it’s an aesthetic you have to get used to, you know? When I came to Louisiana for the first time to visit before moving here, the friends I had met in Nova Scotia were playing a Chris Ardoin CD where he had a cover of a Phil Collins tune. And, I love the 80s music. Yeah [laughs], I was in a Prince tribute band in college. So, I heard this song and this playstyle and something about it just connected with me right away. The connection between the culture of zydeco music and the influences of blues and R&B and its linguistic components — I was hooked. And, when I did move down here I started playing in the Cajun music scene, but found myself moving more towards zydeco and found a lot more of myself in that style of music.

I fell into my project, my thesis, really through my work as a musician. I got to meet a lot of zydeco performers that I was able to connect with for my research. I got to play with these guys and then school started and it made sense to spin the work that I was already doing as a performer and a producer to benefit the academic community and do more to explore  the culture of zydeco in south Louisiana.

What experiences did you enjoy the most at UL Lafayette? What new opportunities did you have inside and outside of the classroom?

My research has really let me do things that I didn’t think I’d ever be able to do. I had one of my musical dreams come true here in Lafayette. I have three top musicians in my life that I wanted to somehow interact with, and  one particular local zydeco musician was one of them. And, you know, it wasn’t just a handshake and an autograph, I got to play music with him and talk to him. And I couldn’t have done that in another city.

In the University, getting to play with so many talented musicians was an amazing experience. The traditional music ensembles that happen in and around Angelle Hall are amazing. I mean, I got to play zydeco music for credit, with other musicians who love and understand music as much as, and often more than, I do. There are so many types and styles of music represented there that someone who loves music would be hard pressed not to find something they love. Cajun music, acoustic blues, classical — there’s a wide berth of representation there and so much talent.

What’s next after graduation?

Currently, I’m working on a project called White Raspberry, which is pop music based on real synthesizers and drum machines. I’m making period-authentic 80s music using all of the same instruments and methods they would have used in that time. No emulation, no software instruments. 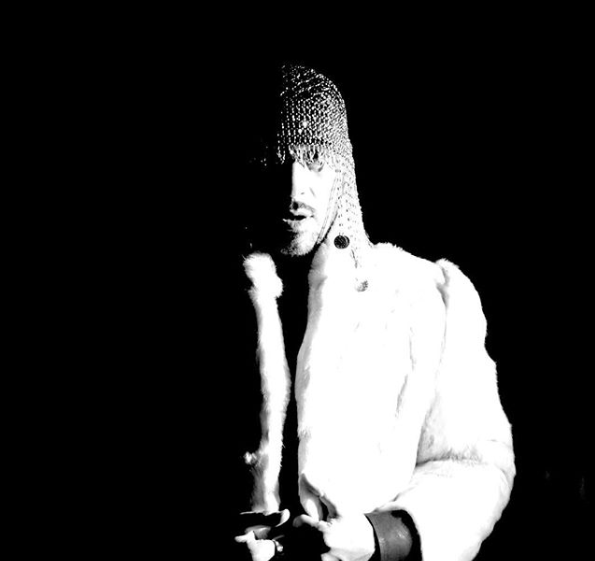 As for longer term, a theme that regularly runs through my decisions and choices in life is definitely culture, especially with a focus on language, music, and food. So, this summer, I’ll be working in Oman to study Arabic and play the ’oud [a traditional Arabic instrument] on a fellowship through the Sultan Qaboos Cultural Center of Oman, who I worked with last year at a language program in Washington. I’m really excited because there’s a big connection here to the area. There’s a huge contingent of Omani students in Lafayette that I really connected with, and I’m looking forward to upping my Arabic skills and learning more about the culture and the people.

Finally, what advice would you give to incoming graduate students?

Have a genuine interest in the world and the culture around you, and be open to sharing your own culture. A lot of doors opened for me because of my love and want to understand other people’s cultures and communities, and I think it’s really important for your own development to have an understanding and appreciation of where other people come from.

And, you know, study what you love. As much as we don’t like to admit it, what we study and our passions kind of shape who we are and what we do. So, make sure it’s something you can take seriously, but also enjoy at the same time.

Have a passion for music? Learn more about the opportunities available in our Master of Music degree program >